» All the offers
Photogallery Floorplan

Unforgettable holidays on the Gargano.

The Gargano is a land with a particular charm, not only for the splendid nature and the crystalline sea, but also because it hosts mystical places of great value.

An example is Monte Sant'Angelo, famous for the Sanctuary of San Michele Arcangelo , a destination for pilgrimages of the Christian faithful for centuries.

According to tradition, a rich shepherd had lost a bull and found it after a few days inside a cave. He decided to take it down and shot an arrow to kill the animal, but inexplicably the arrow came back and wounded him. The shocked man confided in the local bishop, who ordered three days of penance to all. On the third day the Archangel Michael appeared to the bishop and declared the cave a sacred place, from which he would protect the inhabitants of the place.

The Sanctuary originates from the first apparition of the Archangel Michael and over the centuries, under various dominations, it undergoes continuous changes, to reach its current appearance and become the destination of an incredible flow of Christian pilgrims.

In the 17th century it became the most important center in the Gargano.

The structure of the Sanctuary consists of an upper level, which includes the facade and the bell tower, and a lower level which is accessed via the wide and long staircase of 89 steps that leads to the cave, the devotional museum and the crypts.

Monte Sant'Angelo arouses great interest also for other mystical places and monuments to admire, distributed on the urban fabric: the Complex of San Pietro , formed by the Baptistery of San Giovanni and the church of Santa Maria Maggiore, the second pole linked to worship and devotion in the town of Gargano; the Castle of Monte Sant'Angelo , an imposing structure that still retains the hulled Torrione and the Treasure Room, probably dedicated to parties and convivialities in ancient times.

Also of great interest is the Museum of Popular Arts and Traditions , located in the former convent of San Francesco, which preserves costumes, tapestries, furnishings, tools and objects of craftsmanship and jewelery, evidence of the life of the people of the Gargano.

Monte Sant'Angelo arouses great interest also for other mystical places and monuments to admire, distributed on the urban fabric

What to do & see in Monte Sant'Angelo

A territory to discover

Among the main buildings, undoubtedly worth visiting, are the Basilica of San Michele Arcangelo, a Unesco heritage site and the Norman Swabian Castle, but you will find much more to visit. 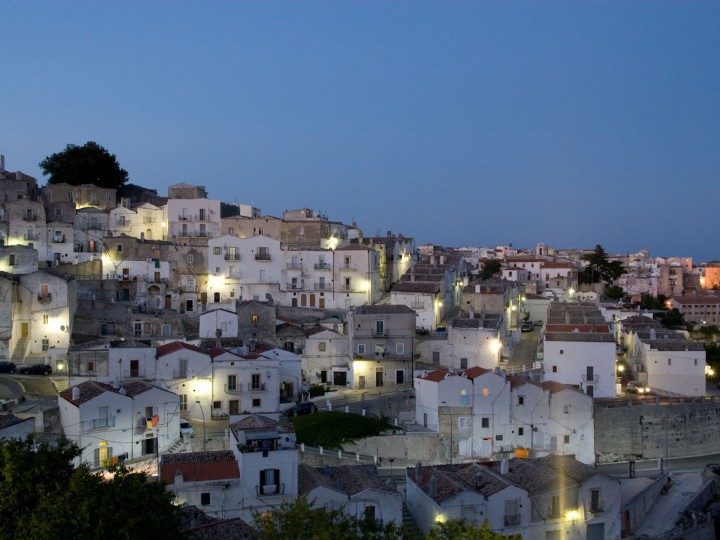 The History of Monte Sant'Angelo

The entire suggestion of its history merges with the consecration and the events of a church dedicated in 493 - according to tradition - to the archangel Michael.

The first nucleus of the church would have been built by Lorenzo Maiorano, bishop of Siponto, in memory of the victorious resistance opposed by his city to a barbarian invasion, thanks to the apparition of the archangel Michael in a cave on the mountain. According to a more recent tradition, the church was built in the second half of the century. VI on an older Basilian abbey, within the framework of a political-religious reorganization of the Lombard duchy of Benevento, which made the church of S. Michele the national sanctuary of the Lombards of the Italian South.

From this period, therefore, it became the destination of an intense tradition of pilgrimages that has continued to this day. 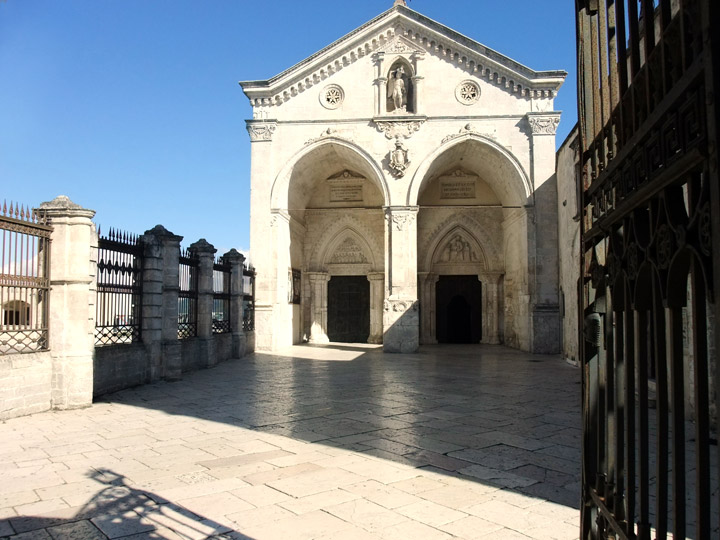 The Sanctuary of San Michele Arcangelo is on the Unesco World Heritage List and since the 5th century it has welcomed pilgrimages from all over the world to Monte Sant'Angelo.

It is one of the most famous places sacred to the Archangel in the world, set on the route of the ancient Via Sacra Langobardorum. It stands on a hill, surrounded by the typical rugged and green landscape of the Gargano, where the white facade welcomes pilgrims with two large arches, surmounted by a niche with the statue of San Michele.

From the vestibule, you enter the 86-step staircase that leads to the Sacred Grotto, the place of the apparitions of St. Michael and the heart of the sanctuary. Here we read an inscription with the words of the Archangel who eternally consecrated this mystical place: “Where the rock opens, there the sins of men will be forgiven”.

The Baroque altar of the Blessed Sacrament and that of the Virgin are added to the magnificent high altar dominated by the marble statue representing the Prince of the Celestial Militias. 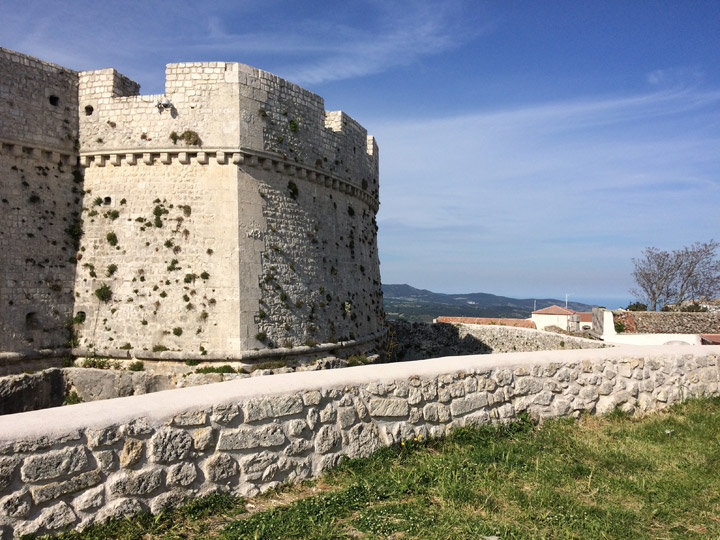 The castle was the home of princes of the Honor Sancti Angeli lordship: it was of Rainulfo (count of Aversa) and then of Roberto il Guiscardo who, after having surrounded the city with walls, in the 11th century had the oldest part rebuilt, the Tower of the Giants, pentagonal in shape, 18 meters high and with 3 meters thick walls.

The structure was assuming importance in the defense of the Gargano one of the three Castra exempta (privileged). It hosted Frederick II of Swabia and his favorite, Countess Bianca Lancia of Turin, and for this reason it presents impressive but refined architectural works in the Frederick style, as evidenced by the thirteenth-century room of the “Treasury” with a central pillar and pointed vaults.

The abbey of Santa Maria di Pulsano is a monastic complex located on the Gargano. Its hermitages are the place of the FAI heart. September 8 is the feast of the Madonna di Pulsano: the faithful leave from Monte Sant'Angelo and reach the abbey on the back of mules.

The monastery also has a guesthouse to accommodate a limited number of pilgrims for short retreat periods. 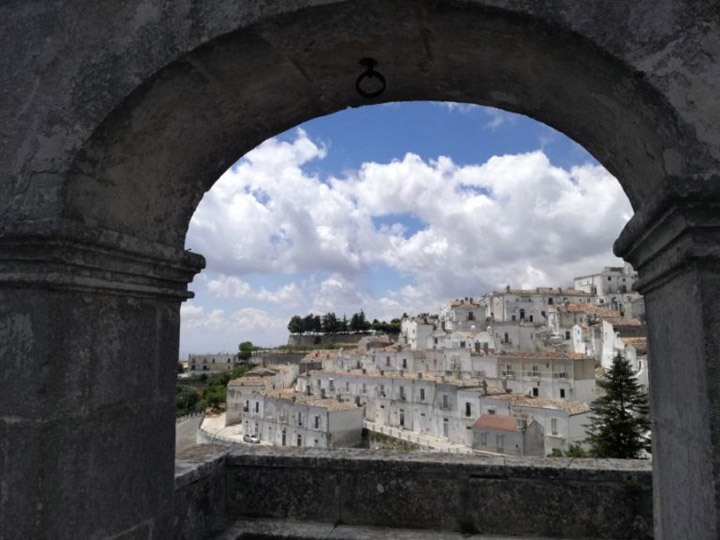 Rione Junno is a millenary district, full of small terraced houses.
The houses were born as a refuge for the pilgrims of San Michele and had a maximum size of 30 meters.

In the past they were inhabited by very numerous families, up to 10 people.
All the houses were equipped with a tank system that collected rainwater, used for domestic use.

The Rione Junno is located in a strategic position to visit the main attractions of Monte Sant'Angelo. Park your car and set off to discover.
The Basilica of San Michele, the Castle and the META are just a few minutes away on foot. 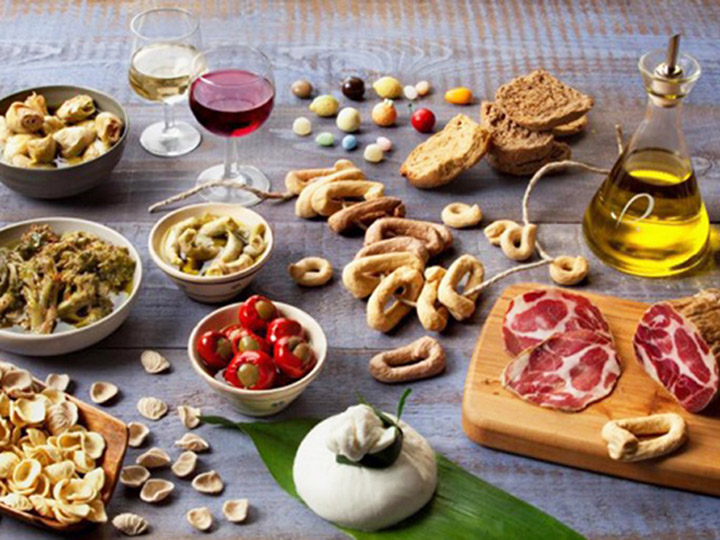 Apulian cuisine is characterized above all by the emphasis given to the raw material, both from land and sea, and by the fact that all the ingredients are aimed at enhancing and not altering the basic flavors of the products used.

Although there are common dishes, the recipes vary from province to province, and sometimes, from city to city, so for example the typical recipes of the provinces of Taranto, Brindisi and Bari, lying on the sea, are not the same as those practiced in the province of Foggia, more hilly, and of Lecce, more terrestrial.

There are many recipes that this cuisine presents, which also has a particularity that distinguishes it from the others, of offering different dishes in relation to the different seasons, so that during the milder seasons, that is in spring and summer, preference is given to vegetables and fish, while in the others legumes predominate, home-made pasta dressed with various sauces, alone or combined with vegetables or fish.